Uganda’s leader Yoweri Museveni has promoted his eldest son to become a special presidential adviser in a reshuffle of army commanders.

Maj Gen Muhoozi Kainerugaba has risen rapidly within the military, fuelling speculation that he is being groomed to become president one day.

Mr Museveni, 72, is one of Africa’s longest-serving leaders.

He came to power in 1986 after winning a five-year guerrilla war – and last year won his fifth term in office with more than 60% of the vote.

He graduated from the UK’s Royal Military Academy Sandhurst in 2000 and last year was promoted from brigadier to major general. 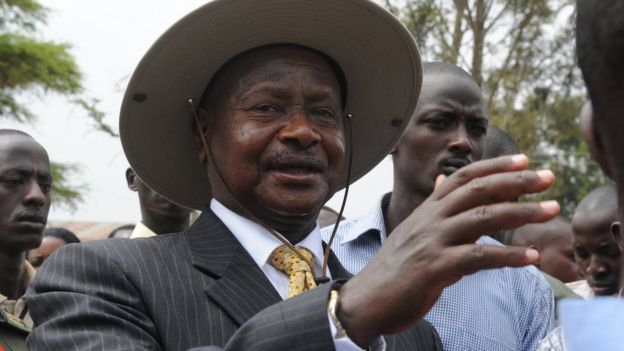 « Muhoozi… is going to play a significant role in a post-Museveni Uganda, there’s no doubt about it, » political commentator and rights activist Nicholas Opiyo told the Reuters news agency.

« He is just giving the boy a hand in experiencing how government works on the side of politics. »

In the reshuffle Brigadier Peter Elwelu, who oversaw a deadly raid in November on the palace of a regional king accused of launching a secessionist movement, was promoted to army chief.

The BBC’s Patience Atuhaire in Kampala says the promotion is being seen as a reward for the operation, in which more than 60 people were killed.

Meanwhile the previous army chief General Katumba Wamala has been made a junior Minister for Works in the government after serving as the top army official since 2013, a departure seen as a demotion, our correspondent says.

Military spokesman Paddy Ankunda said the moves were part of normal changes within the institution.