There was to be no triumphant end to Usain Bolt’s final individual race.

The great Jamaican will retire after the IAAF World Championships in London, bringing the curtain down on an incomparable career.
But in the 100m final on Saturday he had to settle for bronze as the controversial American Justin Gatlin secured a surprise victory in a season’s best 9.92 seconds.
Fellow American Christian Coleman (9.94) took silver, with eight-time Olympic champion Bolt, still the reigning 100m and 200m world record holder, in bronze, clocking 9.95 seconds.
Gatlin entered London’s Olympic Stadium with the crowd’s boos ringing in his ears. The 35-year-old is regarded by many as the sport’s villain after twice being banned for doping offenses. He was also jeered in the heats and semifinals.
Read More
But the 2004 Olympic champion said he « tuned out » the supporters’ din to claim a victory which wrecked Bolt’s farewell.
READ: Usain Bolt, farewell to a wonder of our sporting age 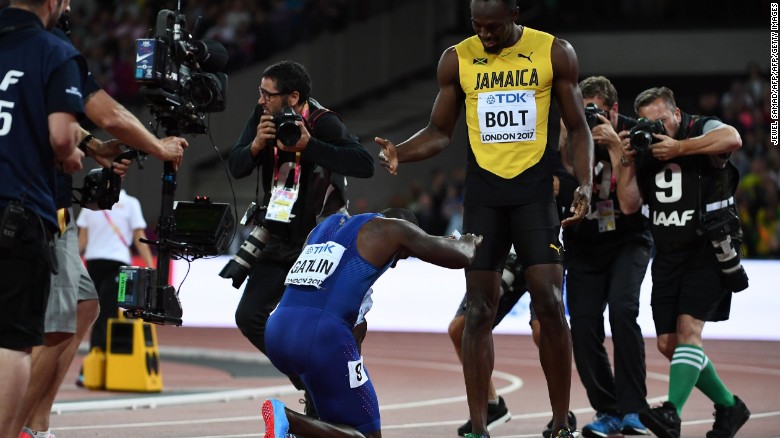 Gatlin genuflected to the Jamaican after his victory. Despite failing to claim a 12th world title, the night still belonged to the fastest man in history.
It was Bolt who was the last athlete to leave the track as he treated the 50,000-strong capacity crowd, and a throng of photographers, to his celebratory « To Da World » pose.
The crowd had come expecting Bolt to secure a 20th Olympic and world gold medal, but with his 31st birthday fast approaching this was a season too far.
He had only dipped under 10 seconds once this season prior to these championships and — though earlier in the week he declared himself ready to defend his world crown — he did not seem like the Bolt of old.
READ: Bolt in numbers — why the Jamaican is the greatest
There was a little fooling around on the start line, but not with the same gusto as in the past.
Throughout his career the sprinter has made winning look effortless, but on a floodlit evening in the English capital he had to work for his medal.
After a disappointing start the Jamaican, for the first time in his career at a major championship, was grimacing as he dipped for the line, straining for a glorious end to his individual career. 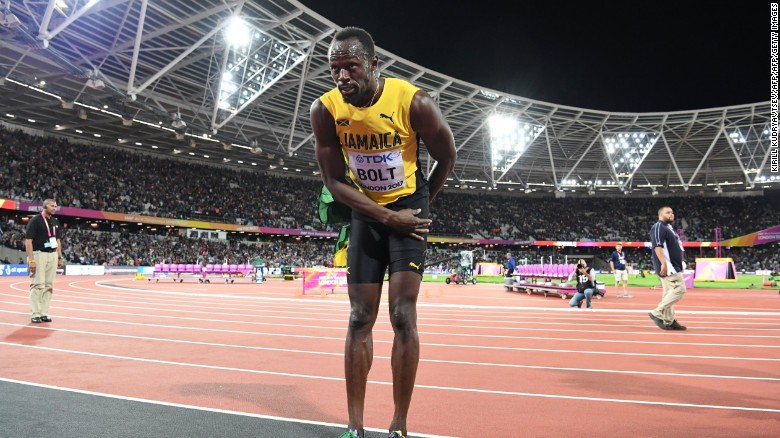 Bolt is expected to compete in the 4x100m relay on August 12 and should he and his teammates retain their title, his tally of World Championships golds will rise to 12, two more than long-distance runner Mo Farah, who is second on the all-time list.
After that there will be no more and his sport will never be the same.
No sprinter has ever run as quickly or won as many gold medals, and done so with such easy charm.
For nearly a decade he has been the undoubted superstar of track and field, his electric personality and incredible feats illuminating a sport darkened by doping.
Bolt told CNN earlier this week that it will take more than one athlete to fill the vibrant void he will leave behind and the sport now faces a period of transition without its main man.
Where does Usain Bolt rank in the pantheon of sport’s greats? Have your say on our Facebook page.

He has been likened to three-time heavyweight champion Muhammad Ali but, in some ways, the Jamaican’s career has surpassed that of the legendary American boxer, even though his last solo race ended with a bronze.
Only twice has Bolt failed to triumph on the grandest stage — a third place in London and a false start in the 2011 100m World Championships final. 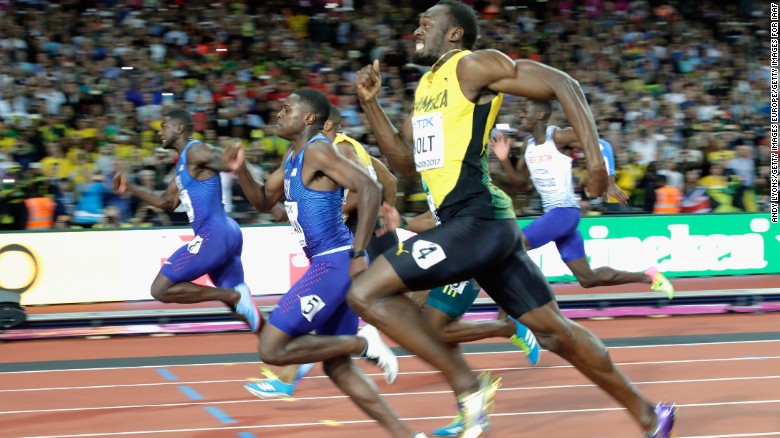 The 30-year-old’s longevity has been as remarkable as the times he produced in his early twenties.
At last summer’s Rio Olympics, Bolt became the first man to win three 100m Olympic titles, securing his status as one of sport’s greats.
He achieved an unprecedented Olympic « triple-triple » in the sprint events (winning the 100m, 200m and sprint relay) but the 4x100m gold won in Beijing 2008 was taken away from him following teammate Nesta Carter’s retrospective positive doping test earlier this year.
All four of the fastest 100m times in history belong to Bolt and his sensational 100m world record of 9.58 seconds, achieved in Berlin in 2009, will live long in the memory.
The age of Bolt is now over, yet the baton has been passed not to a new generation but an American five years the Jamaican’s senior.
However, 21-year-old silver medalist Coleman — still the fastest man in the world this year with a 9.82 run in Eugene in June — could be Bolt’s long-term successor in the blue riband event.
Cnn
Partager
Précédent Atleti boss Simeone refuses to fan Costa transfer flames
Prochain How to sleep better: 37 hacks