Doing it for Ghana: Man’s epic 4,900-mile road trip from Paris to Accra Flying from Paris to Accra takes six hours and 20 minutes, direct. But why fly when you can drive?One Ghanaian opted to take the road less traveled this summer, clocking 4,900 miles in just nine days. Why? For family and for country.

Twenty-nine-year-old mechanical engineer Nicholas Afedi Donkoh drove all the way from his house in France to his hometown in Ghana to prove a point: that everyone deserves an adventure.
« I just wanted the world to know that it’s not only white people who can go on such trips, but we blacks, too, can do that as well, » he says. 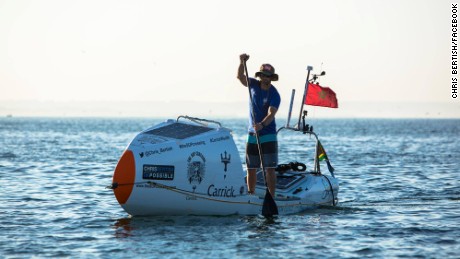 World-first as man crosses Atlantic Ocean unaided on paddle board
There was a secondary purpose also: « The whole idea was to make Ghana more popular and also make Ghanaians all over the world proud. »
In an exclusive interview with CNN, Donkoh says he bankrolled the trip himself, denying earlier reports that he received sponsorships, while revealing he spent nearly $2,400 just on fuel.
Before setting off, Donkoh tinkered with his BMW 7 Series to boost performance.
« I increased the horsepower from 400 to 450 so that the car could move a little bit faster, » he says, adding that a trip to the Chambre de Commerce in Paris was required for all the necessary travel documents and permits. A bit of self-care was also called for, with the driver kick-starting an exercise regimen to ready himself for the road.

On the evening of Friday July 7, the Ghanaian loaded his car with 24 bottles of water, food and two spare tires and set off into the night, quad bike in tow.
Driving through France to the southern tip of Spain, Donkoh arrived at the port city of Algeciras on the Bay of Gibraltar. From there he hopped on a ferry to Tangier in northern Morocco. With the Atlantic to his right, he continued through Western Sahara, then Mauritania, Mali and Burkina Faso.
« I spent about three days driving on the desert, » he says, describing the process as difficult. Donkoh bemoaned the border crossings and immigration systems: « Even if you have all your traveling documents valid, you still have to pay some money before you’ll be allowed to cross the border. It was sometimes frustrating. »
Then there was the terrain. In all, Donkoh says he lost seven tires to the road. At night he sought out gas stations in lieu of a room. « I initially planned to stay in hotels, but things didn’t go on well, so I had to sleep in my car. It was only in Burkina Faso that I spent the night in a hotel, » he says.
Despite the obstacles, he says it was still « a nice experience. I even met some Ghanaians in Mauritania who invited me over for a bowl of our local fufu dish in their home. I met amazing people during this journey. »

Midafternoon on Sunday, July 16, Donkoh crossed from Burkina Faso to Paga in Ghana’s Upper East region.
« That was the only border I wasn’t delayed, » he recalls. « The immigration officers were very surprised when I told them that I drove all the way from Paris. I was allowed to cross without going through any form of immigration checks. »
Upon arriving he first paid a courtesy visit to Regional Minister Rockson Bukari in Bolgatanga, before heading to his hometown, Tarkwa, in the west of the country.
« When you travel by air, you don’t really see anything, » he says, reflecting on the experience. « You only arrive at the airport of your destination and disembark. But when you travel by road, you will see a lot of beautiful places and nice things on the way. It was a great experience traveling through the desert and all those savanna areas. »

On the road again?

The adventure doesn’t stop in Accra, says Donkoh — nor does the flag-flying. He’s set his sights on South Africa and wants to travel there in a Kantanka, a Ghanaian-made auto brand. 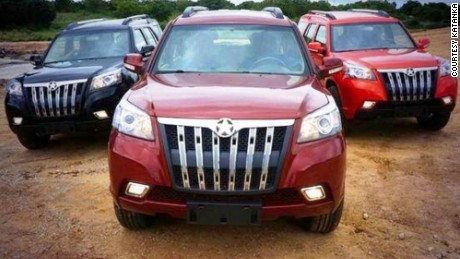 First ever ‘Made in Ghana’ cars are built to survive anything
« We are currently discussing it with the manufacturers of Kantanka cars, » he says, smiling. « I’d like to do this trip from Accra to Johannesburg just to promote Ghana. »
As for Donkoh’s beloved BMW, its fate is up in the air. The adventurer says he’s unsure whether to drive it back to France, sell it or donate it to the Ghana Museum.
CNN
Partager
Précédent First global pledge to end cholera by 2030
Prochain Political uncertainty slows Kenya’s economy